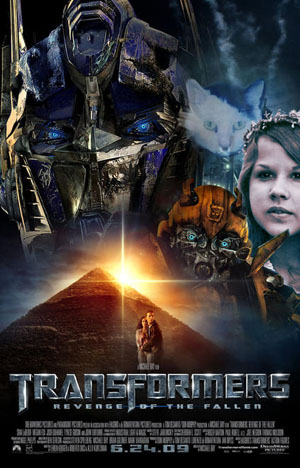 (This is a movie review I wrote for another website under the name Capt Cranky.)

Before we begin, in the interest of full disclosure, I have to admit this movie put me to sleep. I dozed off at least 3 times. I’m not sure for how long, but when I woke back up it appeared to be the same scene. I may have missed some major plot points, but I don’t think so.

So, with that in mind, let’s just talk about what I do remember.

There is some guy and a girl and a yellow robot car. The yellow robot car is part of an entire group of good robots things called the Autoeroticbots – or something like that. There is a big truck robot who is the leader and a couple of stupid Jar Jar Binks level robot things which talk non-stop and are not funny (watching someone put a thumbtack up their butt would be funnier then the two bickering cars).

Every now and then some bad robot guys show up and the movie screen gets all blurry for about 10 minutes. I’m pretty sure this was the movie and not me falling asleep.

After a few scenes on top of large structures with circling helicopter shots played to a painfully drab symphonic soundtrack, our main characters are off on some mission – but I don’t recall what it is. They meet up with another robot thing who they discover is older then the other robot things – whooop-dee-fucking-doo.

Then Jesus “The Jesus” Quintana from The Big Lebowski shows up and helps but he doesn’t bowl.

At one point our heroes have to recover some object before the bad robots do. I couldn’t be bothered to care what the object was so don’t ask me. There is some sort of long back story about the object and how a group of robots sacrificed their “lives” to join together to form an impenetrable shield around the object. Of course when our heroes find the item they easily pop through the impenetrable shield. Hero boy gets the object and I think I remember it turning to dust and hero boy puts the dust in his sock.. or something like that. That’s a pretty stupid thing to have in a movie so I most likely dozed off and dreamed that part.

I’m pretty sure the scene with Linda Blair dressed as an elf princess being forced at gun point by terrorist monkeys to wander around Disneyland to find hidden Oreo cookies while avoiding falling office furniture being thrown by a 600 foot Hitler kitten who shouted “mazel tov” was a dream as well. That would be a shame because it was the best scene in the movie.

There are a bunch more scenes of characters on top of large structures with circling helicopter shots played to a painfully drab symphonic soundtrack, military men in slow motion and blurry quick edit jump cuts of fighting robots.

Finally in the end I think the good guys win and destroy an Egyptian pyramid or two.